Snake in the Hen House 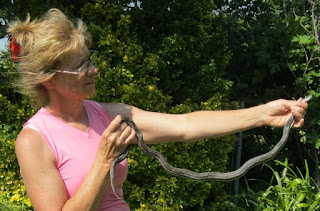 Mike got a surprise when he went to gather eggs this afternoon. Curled up in the 4th nest box was this handsome specimen of Elaphe obsoleta linheimeri - also known as a Texas Rat Snake or Chicken Snake (for obvious reasons).
Surprisingly, Mike did NOT have a heart attack when he opened the nest box and saw the snake. Instead he calmly came to get me where I was hoeing in the garden and announced "There's a snake in one of the nest boxes". When I asked which one, he answered "In front of where the s*** is on the floor". OK, so he wasn't as calm as I thought. 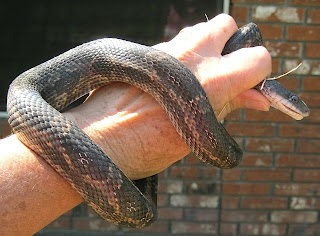 He said he would help me re-locate it down the road if I would ride in the bed of the truck.
I did convince him to get close enough to take a picture.
Sissy.
I needed to get the mail anyway, so I carried it down to the end of our very long driveway and released it in the weeds across the road. He didn't have a bulge indicating that he had scarfed an egg, and I THINK the chicks are too big to eat now (but he still might have killed one and tried).
We will need to be better about keeping the henhouse door closed. After 2 years of chicken raising, we have NOT found a snake before now. We were lucky - THIS TIME.
nodp
Posted by Debbie at 4:57 PM 2 comments: 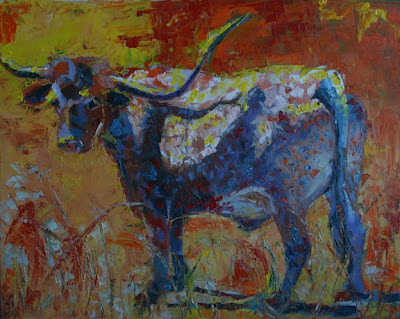 16 X 20 Palette Knife Oil on canvas
This painting is for sale - Please Contact Artist
Wow - Have I not posted for over a month???? I have been busy with my adorable grandbaby, the garden, the animals and a lovely commission for some precious people in Florida (don't worry, I will show it to you when I am finished!) MY LIFE IS OVERFLOWING!
I painted a completely different painting on this canvas first - and then wiped it off. And I nearly wiped this one off when I was half-way through with it. I have just not had the desire to paint lately. Too many other interesting things to do. But then I started having fun moving paint around (and there is a LOT of it!) and just let go with it. It's definitely a "wall brightener"! 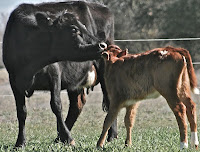 Aunt Abbey is raising her 4th calf for us (Sofie, the Jersey) and I need to wean her SOON. Abbey is due to calve in August and needs to dry up before that happens. Little Sofie is NOT happy being allowed to only nurse once a day now. She will REALLY be unhappy when she's cut off entirely. The good news is that she is halter broke. The bad news is that she acts like a very large dog and is not afraid to shove me around. The lessons in respect will be next.

If you are interested in this painting, click here to send me an email. I accept checks and Paypal. I can also arrange LAYAWAY. To view my latest paintings on Daily Painters go HERE. To view larger paintings, go to my Website HERE. To view a wealth of OTHER Texas Artists, enjoy THIS site!
Posted by Debbie at 9:03 PM No comments: