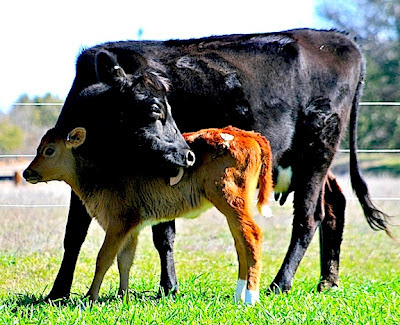 For those of you following the saga of Aunt Abbey, our family milk cow, here is the latest.
Abbey has already raised 3 calves. One of her own and 2 foster calves. The last one was taken to the sale barn 2 weeks ago (sorry, folks, this is the fate of most dairy bull calves...) at the age of about 5 months. He'll go onto someone's pasture for the next 5 months and then...well, no need to go into details.
Of course, when we removed the calf, Abbey's udder continued to produce milk - LOTS of it - and I just couldn't let it go to waste. BUT what do we do with a couple extra gallons of milk every day???? You're getting ahead of me...
After a week of milking, straining milk, freezing milk, separating cream, making butter, giving away milk, and drinking LOTS of milk, we decided to let Aunt Abbey raise one more calf. Her own baby isn't due until August, and typically most milk cows are allowed to "rest" a month before they give birth. But July is 4 1/2 months away - PLENTY of time to raise one more! 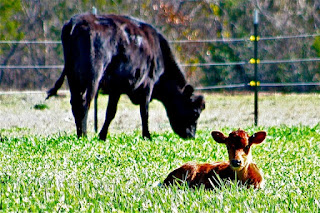 So last Monday, I hooked up the trailer and off to the sale barn I trooped. I was in for a shock. Five months ago little heifer calves were selling for less than $50, and there were usually plenty to choose from. Monday, there were 4 holstein heifers and 2 Jersey-cross heifers - all went for over $125 and I paid $185 for "Sister Sofie". I suspect she was more than a day old (probably a week) because her umbilical was gone and she looked pretty lively.
After a week of lightly restraining Abbey so she wouldn't kick Sofie, the bonding happened and now we are a bovine family of 2 again. I plan to keep this calf to milk and hopefully get her on a separate calving cycle from her Aunt Abbey. The gentling process has already begun and she loves being scratched.
Stay tuned...
nodp

It was wet and rainy of of the first 5 days we had her, so she was confined in the barn. The above movie is her first taste of freedom! Ye ha!
Isaiah 49:23
Kings will be your foster fathers, and their queens your nursing mothers. They will bow down before you with their faces to the ground; they will lick the dust at your feet. Then you will know that I am the LORD; those who hope in me will not be disappointed.
Posted by Debbie at 1:37 PM 1 comment:

Email ThisBlogThis!Share to TwitterShare to FacebookShare to Pinterest
Labels: abbey 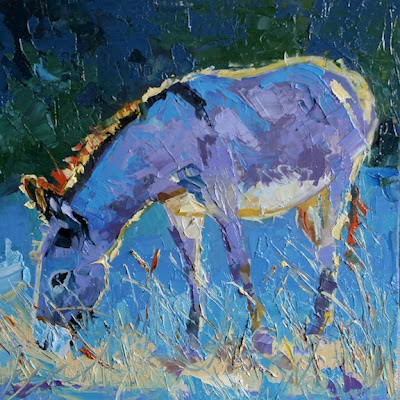 8 X 8 Palette Knife Oil on board $115
THIS PAINTING HAS BEEN SOLD to a collector in Arizona
I am NOT a palette knife painter, but sometimes I like to pretend I am. My best artist buddy and collaborator in paint is Laurie Pace and SHE does palette knife!
This little fat donkey lives down the road from me, and she was silhouetted on a grassy knoll one afternoon as I came home from Granbury. Since I never go anywhere without my camera, I slammed on my brakes and caught a quick image of her before she came up to the fence to investigate me. And yes, the afternoon colors were almost this vivid! Well, in MY eyes, anyway. Latest on Aunt Abbey: We hauled her calf, Other Brother Darryl, to the sale barn Wednesday and got a record check for a 400 pound calf. After milking her daily for 5 days (and filling the freezer with milk and cream) we decided to put one more calf on her before we dry her up in July. The pickings were pretty slim at the sale barn Monday, but I did manage to find a tiny half-Jersey heifer that looked like it might be lively and persistent enough to get past Aunt Abbey's defensive kicks. Abbey KNOWS what her calf looks like and this small red one ain't it! No, Mom, we haven't named YOUR calf yet!
1 Kings 9:3
The LORD said to him: “I have heard the prayer and plea you have made before me; I have consecrated this temple, which you have built, by putting my Name there forever. My eyes and my heart will always be there.

If you are interested in this painting, click here to send me an email. I accept checks and Paypal. I can also arrange LAYAWAY. To view my latest paintings on Daily Painters go HERE. To view larger paintings, go to my Website HERE. To view a wealth of OTHER Texas Artists, enjoy THIS site!
Posted by Debbie at 10:29 AM 3 comments: 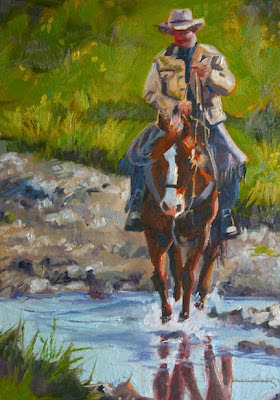 5 X 7 Oil on gessoed panel $115
Includes shipping and insurance
There's a mistaken rumor that "real cowboys" never hold on the the saddle horn. That's not true. Smart cowboys use whatever tools are available to stay safe - especially when training a green horse.
I saw this cowboy at a calf working several Springs back, and he was patiently walking his horse back and forth through the water. Evidently the animal had been initially reluctant to cross it, so he was encouraged to get his feet wet for the next 15 minutes. Back and forth. And since the horse was green, the cowboy held on securely - knowing that even the calmest horse sometimes decides to pitch a fit when asked to do something unfamiliar...
Psalm 37:3
Trust in the LORD and do good; dwell in the land and enjoy safe pasture.
If you are interested in this painting, click here to send me an email. I accept checks and Paypal. I can also arrange LAYAWAY. To view my latest paintings on Daily Painters go HERE. To view larger paintings, go to my Website HERE. To view a wealth of OTHER Texas Artists, enjoy THIS site!