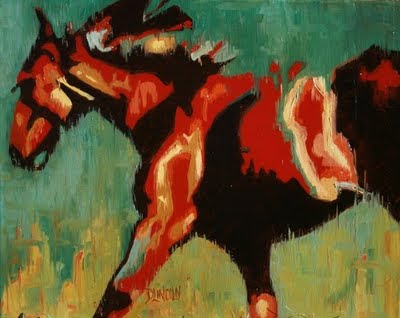 16 X 20 oil on stretched canvas $720
Includes Native Texas Mesquite frame and shipping
Will layaway
I have played around with a number of styles of horse images and this one emerged my favorite. It looks a little like a woodcut and has a lot of texture and action. 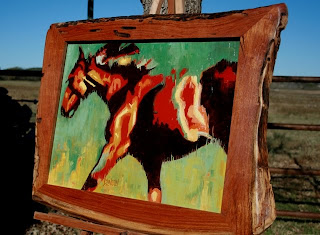 The frame was made of mesquite by a local craftsman. Many view mesquite trees as a nuisance, but they have the ability to survive all kinds of trauma and find water where there appears to be none. PLUS, mesquite smoked barbecue is Heaven sent. AND since the wood is so hard, it makes beautiful furniture, cutting boards and great firewood that burns hot and long.
Matthew 10:42
And if anyone gives even a cup of cold water to one of these little ones because he is my disciple, I tell you the truth, he will certainly not lose his reward.

For the past 15 years, our little community school has sponsored a neighborhood-wide thanksgiving dinner the Friday before Thanksgiving. Anyone and everyone is invited, and it has grown every year. Turkeys and all the trimmings are donated and the 7th and 8th graders at the school get to do the serving. For the past 3 years we have invited soldiers from Ft. Hood to join us. Killeen, Texas is nearly 2 1/2 hours away, but we always have 70 or so soldiers who think the trip is worth their effort, and this year was no different.
The entire community turned out as well as a number of people from Stephenville, Huckabay, Lipan, etc. The soldiers were given a warm welcome and sent home with left-over cakes to share with their friends back on base. Mike and I made an effort to talk to and shake the hand of each and every one. A local celebrity, Tuff Hedeman, also came and answered questions about his rodeo career and the famous bull "Bodacious".
WFAA, channel 8 in Dallas, sent a camera crew again this year and we were grateful for the press coverage - but only to show the world that a little community like ours can make a difference.
View the news reel HERE.
nodp

Posted by Debbie at 7:49 AM No comments: 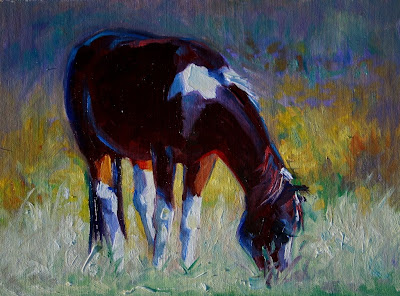 not available
Lately I have been working on large canvases and have gotten away from the little 'uns. But Dandy was SO pretty in the afternoon sun today, that I just couldn't resist her. We have had a couple light frosts and the pasture grasses are all different, brilliant colors. Dandy has begun to put on her winter coat, and is a rich, dark purpley, brown, black color that is nearly impossible to describe (or paint).
She isn't as big as I would have expected at 18 months, but she is still growing. My best guess is 13 1/2 hands (about 54 inches at the withers, for you non-horsey people). Momma PJ is right at 15 hands (60") and had nearly reached that height by the time she was 18 months. BUT I figure, if she stays short, then that just puts the ground closer and offers less gravity influence on my old bones...
I have an old light barrel racing saddle that I plan to place on her back soon. I promise a video of that event. I really don't expect a rodeo, but with horses, you can always expect the unexpected, so she might surprise us. I really think that she will simply turn around, look at it and give me her "Oh, well, what next?" look.
Stay tuned....
Genesis 1:25
God made the wild animals according to their kinds, the livestock according to their kinds, and all the creatures that move along the ground according to their kinds. And God saw that it was good.
Posted by Debbie at 4:17 PM 1 comment: 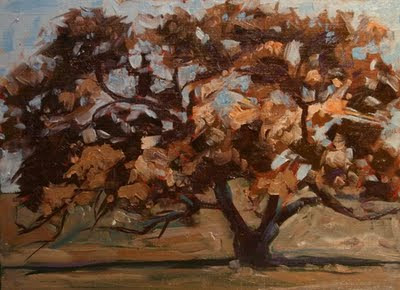 6 X 8 Oil on linen panel
SOLD
I used to use a color wheel - years ago - and I misplaced it. I forgot the challenge a color wheel can present. I bought a new one last week and decided to use it weekly just to make myself try something new.
This color combination is called a "split complement" and uses only three colors plus white: Phalo blue, violet and yellow orange. I didn't come close to using the myriad of combinations still available from just these three colors, but I still like what evolved - fall colors.
There's a lot of paint on this one, so you'll need to be patient while it dries...
Ezekiel 17:3
Say to them, 'This is what the Sovereign LORD says: A great eagle with powerful wings, long feathers and full plumage of varied colors came to Lebanon. 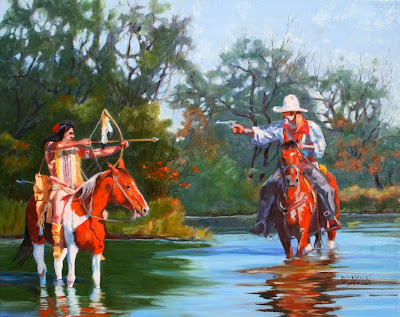 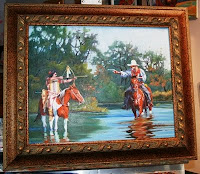 insurance extra...ask for quote
I posted this painting a couple weeks ago and my friend Rick suggested I darken the area behind the Indian, and I agreed. I also changed the background color and warmed it up a bit.
I have a number of 16 X 20 frames that it looks pretty good in, too. and I'm showing 2 of those here. PRICE INCLUDES FRAME!!! 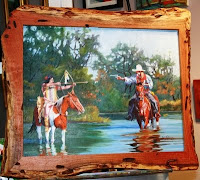 If you want a REALLY nice Christmas gift for that western art lover of yours, this may be it. It will need to dry at least 4 more weeks before I can varnish it. And then a couple more days after that before I can ship. AND I accept layaway (1/3, 1/3, 1/3)
Don't let this one get away! It goes to the gallery next month.
1 Corinthians 15:52
in a flash, in the twinkling of an eye, at the last trumpet. For the trumpet will sound, the dead will be raised imperishable, and we will be changed. 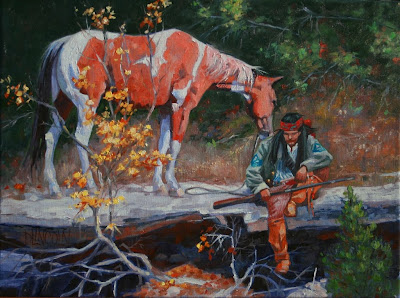 It's early Autumn, and this Indian is guarding a pass along the Paluxy River. Somehow he has acquired a Confederate soldier's jacket to warm him on those cool November mornings. His horse patiently waits. 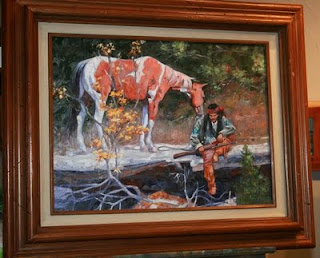 This is the first linen canvas I have stretched in years and I forgot how wonderful (and expensive) they are to paint on. But I am definitely hooked and suppose I will have to give away all these blank cotton canvas I have stashed!

Jeremiah 17:3
My mountain in the land and your wealth and all your treasures I will give away as plunder, together with your high places, because of sin throughout your country.

How to Purchase: This painting is SOLD

Posted by Debbie at 4:26 PM No comments: 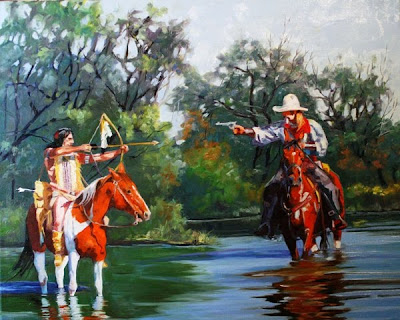 16 X 20 95% complete
I had a number of good suggestions for this painting's title. My two favorites were: Destiny - Choice or Chance and Friendly Texas Welcome.
I have been working on this all day and I really wanted to finish it tonight. Doesn't look like it will happen, though. I'm pooped.
I will re-post when it is truly complete. Meantime, if you are interested in it, contact me and I will send you a more accurate color representation shot in daylight.
I took photos of these individuals last year at Doug Prine's Shoot Out. They were separate images, and I combined them and added the background. This Saturday I am attending Doug's shin-dig again, this time accompanied by Dan Vanderburg, a novelist who has commissioned me to paint an image for his book cover. This is a big deal for me and something I have wanted to do for a long time - illustrations.
At the shoot out we hope to find enough individuals in early 1800's dress to assemble a vignette that will suit the scene that Dan has in mind. Doug has assured me that we will, and if the sun is shining as well, it should be a perfect place to get the images we need.
Stay tuned....
Ecclesiastes 9:11
I have seen something else under the sun: The race is not to the swift or the battle to the strong, nor does food come to the wise or wealth to the brilliant or favor to the learned; but time and chance happen to them all.
nodp